Join us today, Wednesday, August 10 at St. Thomas' on the Bayou for Noonday Prayer at 12:10 p.m. or tonight for Evening Prayer to learn more about yesterday's saint and martyr, Edith Stein (Teresa Benedicta of the Cross), Philosopher, Monastic, and Martyr 1942.

Laurence of Rome, Deacon and Martyr, 258 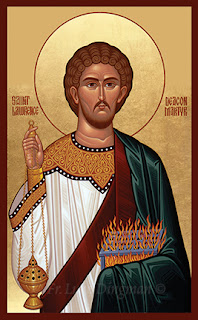 Almighty God, by whose grace and power your servant Laurence triumphed over suffering and despised death: Grant that we may be steadfast in service to the poor and outcast, and may share with him in the joys of your everlasting kingdom; through Jesus Christ our Lord, who lives and reigns with you and the Holy Spirit, one God, for ever and ever. Amen.

Laurence (or Lawrence) was chief of the seven deacons of the congregation at Rome, the seven men who, like Stephen and his companions (Acts 6:1-6), were in charge of administering the church budget, particularly with regard to the care of the poor. In 257, the emperor Valerian began a persecution aimed chiefly at the clergy and the laity of the upper classes. All Church property was confiscated and meetings of Christians were forbidden. The bishop of Rome, Sixtus II, and most of his clergy were executed on 7 August 258, and Laurence on the 10th. This much from the near-contemporary records of the Church. The accounts recorded about a century later by Ambrose (see 7 Dec) and the poet Prudentius say that, as Sixtus was being led to his death, Laurence followed him, saying, "Will you go to heaven and leave me behind?" and that, the bishop replied, "Be comforted, you will follow me in three days." They go on to say that the Roman prefect, knowing that Laurence was the principal financial officer, promised to set him free if he would surrender the wealth of the Church. Laurence agreed, but said that it would take him three days to gather it. During those three days, he placed all the money at his disposal in the hands of trustworthy stewards, and then assembled the sick, the aged, and the poor, the widows and orphans of the congregation, presented them to the prefect, and said, "These are the treasures of the Church." The enraged prefect ordered him to be roasted alive on a gridiron. Laurence bore the torture with great calmness, saying to his executioners at one time, "You may turn me over; I am done on this side." The spectacle of his courage made a great impression on the people of Rome, and made many converts, while greatly reducing among pagans the belief that Christianity was a socially undesirable movement that should be stamped out.

The details of these later accounts have been disputed, on the grounds that a Roman citizen would have been beheaded. However, it is not certain that Laurence was a citizen, or that the prefect could be counted on to observe the law if he were. More serious objections are these: (1) The detailed accounts of the martyrdom of Laurence confuse the persecution under Decius with the persecution under Valerian, describing the latter, not as an emperor, but as the prefect of Rome under the emperor Decius. (2) We have early testimony that Bishop Sixtus and his deacons were not led away to execution, but were summarily beheaded on the scene of their arrest. For these reasons, the Bollandist Pere Delahaye and others believe that Laurence was simply beheaded in 258 with his bishop and fellow deacons. On this theory, it remains unexplained how he became so prominent and acquired so elaborate an account of his martyrdom. Lawrence's emblem in art is (naturally) a gridiron.*

*The Lectionary, James Kiefer, http://www.satucket.com/lectionary/Laurence.htm
Posted by Whit+ at 6:53 AM 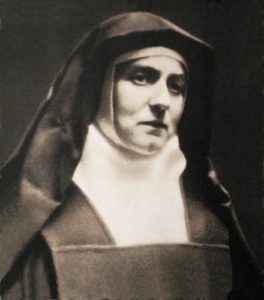 Pour out your grace upon thy church, O God; that, like your servant Edith Stein, we may always seek what is true, defend what is right, reprove what is evil, and forgive those who sin against us, even as your Son commanded; through the same Jesus Christ our Lord, to whom with you and the Holy Spirit be all honor and glory, now and for ever. Amen.

Edith Stein (religious name Teresia Benedicta a Cruce OCD or St. Teresa Benedicta of the Cross; 12 October 1891 – 9 August 1942), was a German Jewish philosopher who converted to Roman Catholicism and became a Discalced Carmelite nun. She is canonized as a martyr and saint of the Catholic Church.

She was born into an observant Jewish family, but was an atheist by her teenage years.

In April 1913 Stein arrived in Göttingen and, by the end of the summer she had decided to pursue her degree in philosophy under Edmund Husserl. Her studies were interrupted in July 1914 because of the outbreak of World War I. She then served as a volunteer wartime Red Cross nurse in an infectious diseases hospital at Märisch-Weisskirchen in 1915. In 1916, Stein moved with Hussrerl to Freiburg in order to complete her dissertation, entitled Zum Problem der Einfühlung (On the Problem of Empathy), which made her a doctor of philosophy, summa cum laude. Because she was a woman, Husserl did not support her submitting her habilitation thesis (a prerequisite for an academic chair) to the University of Freiburg in 1918.

From reading the works of the reformer of the Carmelite Order, Teresa of Ávila, she was drawn to the Catholic faith. She was baptized on 1 January 1922 into the Roman Catholic Church. At that point, she wanted to become a Discalced Carmelite nun, but was dissuaded by her spiritual mentors. She then taught at a Catholic school of education in Speyer. As a result of the requirement of an "Aryan certificate" for civil servants promulgated by the Nazi government in April 1933 as part of its Law for the Restoration of the Professional Civil Service, she had to quit her teaching position.

She was admitted to the Discalced Carmelite monastery in Cologne the following October. She received the religious habit of the Order as a novice in April 1934, taking the religious name Teresa Benedicta of the Cross. In 1938, she and her sister Rosa, by then also a convert and a tertiary of the Order, were sent to the Carmelite monastery in Echt, Netherlands, for their safety. Ultimately, she was not safe in the Netherlands. The Dutch Bishops' Conference had a public statement read in all the churches of the nation on 20 July 1942 condemning Nazi racism. In a retaliatory response on 26 July 1942 the Reichskommissar of the Netherlands, Arthur Seyss-Inquart ordered the arrest of all Jewish converts who had previously been spared. Along with two hundred and forty-three baptized Jews living in the Netherlands, Stein was arrested by the SS on 2 August 1942. On 7 August 1942, early in the morning, 987 Jews were deported to the Auschwitz concentration camp. It was probably on 9 August that Sister Teresa Benedicta of the Cross, her sister, and many more of her people were killed in a mass gas chamber. *

*  The Lectionary, via Wikipedia, http://www.satucket.com/lectionary/Edith_Strein.html 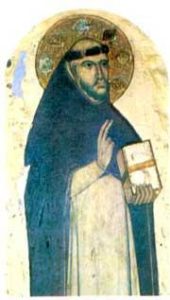 Almighty God, grant unto your people a hunger for your Word and an urgent longing to share your Gospel; that, like your servant Dominic, we might labor to bring the whole world to the knowledge and love of you as you are revealed in your Son Jesus Christ; who lives and reigns with you and the Holy Spirit, one God, for ever and ever. Amen.

Dominic was born in Castile, in Spain, in 1170. He entered the priesthood, and eventually became prior of the canons of the cathedral chapter (the clergy who formed the staff of the cathedral and conducted the daily worship services) at Osma (42:52 N 3:03 W). The turning point of his life came in 1206, when he was chosen to accompany the bishop on a visit to southern France, to an area held by the Albigenses. These were a heretical sect more or less directly descended from the early Gnostics and Manichees. They were dualists, holding that there are two gods, one the god of goodness, light, truth, and spirit, and the other the god of evil, darkness, error, and matter. The material universe is the creation of the bad god. The good god made the souls of men, and the bad god kidnapped them and imprisoned them in bodies of flesh. On their first night in Albigensian country, they stayed at an inn where the innkeeper was an Albigensian. Dominic engaged him in conversation, they sat up all night talking, and by dawn the man was ready to become an orthodox Christian. From then on, Dominic knew what his calling in life was. Dominic and his bishop undertook to study the Albigensian beliefs and to engage in public debates with their opponents. They seemed to be making some progress, but in 1207 the bishop died, and in the same year the murder by Albigenses of the papal legate moved the pope to declare a crusade against the Albigenses, which lasted about five years.

Dominic continued to preach and to debate where he could, and in 1215 he founded an order of preachers, who were to live in poverty, and devote themselves to studying philosophy and theology and to combating false doctrine by logical argument rather than by the use of force. He was convinced that a major obstacle to the conversion of heretics was the material wealth of some of the clergy, which made plausible the accusation that they were concerned for their purses and not for the glory of God, and made workers indisposed to hear them. He therefore determined that the brothers of his order should live lives of poverty and simplicity, being no better off materially than those they sought to convert. When he was in Rome, seeking authorization for his order from the Pope, the Pope gave him a tour of the treasures of the Vatican, and remarked complacently (referring to Acts 3:6), "Peter can no longer say, 'Silver and gold have I none.'" Dominic turned and looked straight at the Pope, and said, "No, and neither can he say, 'Rise and walk.'" He got the permission he was seeking, and the order grew and flourished. Officially known as the Order of Preachers (hence the letters O.P. after the name of a member), it was informally known as the Dominicans, or the Blackfriars (from the color of their cloaks). Two of their best-known members are Albertus Magnus (Albert the Great, 1200-1280, see 15 Nov), who was famous for his learning in numerous fields, and his pupil Thomas Aquinas (1225-1274, see 28 Jan), who wrote reconciling Christian theology with the philosophy of Aristotle, which was then being rediscovered in western Europe, and was thought by many to be a threat to Christianity. In later years, the Order forgot its commitment to "logic and persuasion, not force" as the means of bringing men to Christian truth, and many of its members were active in the Inquisition.

Dominic was three times offered a bishopric, and refused, believing that he was called to another work. He died in 1220 in Bologna, Italy, after a preaching mission to Hungary. His emblem in art is a dog with a torch in its mouth, a pun on his name (the Dominicans are sometimes called the "Domini canes", the hounds of the Lord), and a reference to his relying on the power of preaching.* 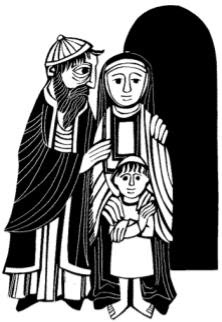 The Most Broken Commandment? 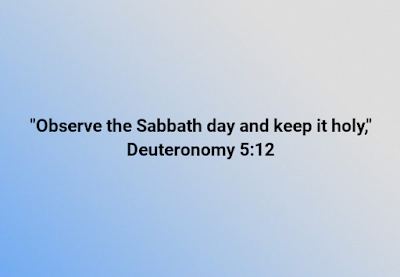 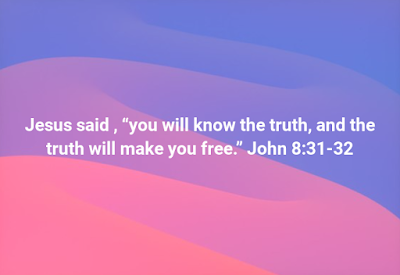 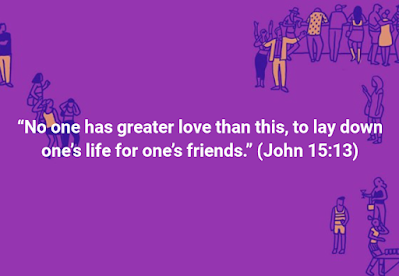