Together Louisiana is pleased to announce that both candidates for Louisiana governor, State Representative John Bel Edwards and U. S. Senator David Vitter, have confirmed their attendance for the Together Louisiana Statewide Assembly this Friday, November 13th, 2pm at Mount Pilgrim Baptist Church 9700 Scenic Highway in Baton Rouge.

More than 400 people have registered to attend the assembly, representing 150 religious congregations and civic organizations from 32 different cities and towns across Louisiana (listed below).

Attendees are asked to arrive at 1:30pm for registration and seating.

Those wishing to attend who have not yet registered may register at laassembly.eventbrite.com. 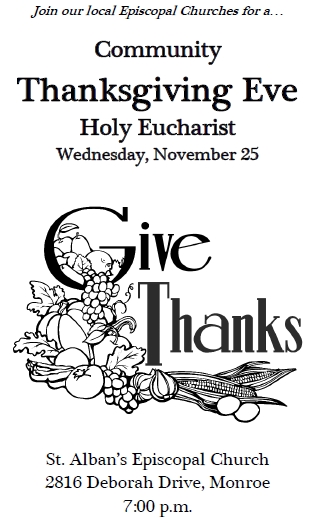 Posted by St. Thomas Episcopal Church at 9:59 AM One of the young men who began attending Canterbury this fall lives in a wheelchair. His name is Logan and he does not have a denominational affiliation. Some of our Canterbury kids who hang out with students from other campus ministries got to be friends with Logan because he is a believer who just doesn't have a denominational identity and isn't sure he wants one! So they invited him to Canterbury and he comes most of the time.

Logan's current wheelchair is a mess. Logan is a pretty big guy and the wheelchair is old and decrepit. Logan is also a COMM major and my advisee, so I see him with some regularity and I have often watched him rolling down a hallway and worried that his chair was going to collapse right out from under him!

So... a bunch of kids with whom he hangs out, including our Canterbury kids and some kids from other campus ministries, have decided to replace Logan's wheelchair--and it's a surprise! The cost of the chair is $3000 and we figure we only need 300 people at $10 a head to do the deed--and even most students can afford $10.

But we'd also like to give you an opportunity to get involved! So... this Sunday  I'll be at St. Thomas' and if you'd like to help, just hand me a $10 bill and say, "Wheels for Logan." (Or whatever, I'll know what it's for!) Or, if you prefer, write a check to St. Thomas' and put "Wheels for Logan" in the memo line and I'll get Henry to write a check.