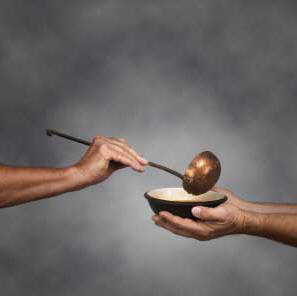 
Back at the beginning of Lent, the Canterbury group decided to forgo food at our meetings during Lent in order to make a donation toward feeding hungry people locally. So, I calculated the average amount we had been spending from the Canterbury budget for food, and it was $17 per meeting.

We also put out a little wooden box at our meetings for those same five weeks that we met without food, and a total of $25 cash was put in the box.

Therefore, I have just composed a memo to Henry Bateman asking him to deposit the cash and write a check in the amount of $110 from the Canterbury fund to the Desiard Street Shelter.