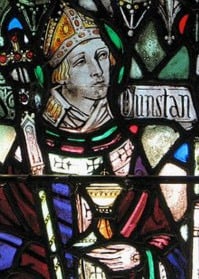 Direct your Church, O Lord, into the beauty of holiness, that, following the good example of your servant Dunstan, we may honor your Son Jesus Christ with our lips and in our lives; to the glory of his Name, who lives and reigns with you and the Holy Spirit, one God, now and for ever. Amen.

Dunstan was born near Glastonbury in the southwest of England about the year 909, ten years after the death of King Alfred. During the Viking invasions of the ninth century, monasteries had been favorite targets of the invaders, and by Dunstan's time English monasticism had been wiped out. In its restoration in the tenth century, Dunstan played the leading role. He was born of an upper-class family, and sent to court, where he did not fit in. At the urging of his uncle, the Bishop of Westminster, he became a monk and a priest, and returned to Glastonbury, where he built a hut near the ruins of the old monastery, and devoted himself to study, music, metal working (particularly the art of casting church bells, an art which he is said to have advanced considerably), and painting. A manuscript illuminated by him is in the British Museum. He returned to court and was again asked to leave; but then King Edmund had a narrow escape from death while hunting, and in gratitude recalled Dunstan and in 943 commissioned him to re-establish monastic life at Glastonbury. (Glastonbury is one of the oldest Christian sites in England, and is associated in legend with King Arthur and his Court, with Joseph of Arimathea, and with other worthies. It has been said that the Holy Grail, the chalice of the Last Supper, is hidden somewhere near Glastonbury.) Under Dunstan's direction, Glastonbury became an important center both of monasticism and of learning. The next king, Edred, adopted Dunstan's ideas for various reforms of the clergy (including the control of many cathedrals by monastic chapters) and for relations with the Danish settlers. These policies made Dunstan popular in the North of England, but unpopular in the South.

Edred was succeeded by his sixteen-year-old nephew Edwy, whom Dunstan openly rebuked for unchastity. The furious Edwy drove Dunstan into exile, but the North rose in rebellion on his behalf. When the dust settled, Edwy was dead, his brother Edgar was king, and Dunstan was Archbishop of Canterbury. The coronation service which Dunstan compiled for Edgar is the earliest English coronation service of which the full text survives, and is the basis for all such services since, down to the present. With the active support of King Edgar, Dunstan re-established monastic communities at Malmesbury, Westminster, Bath, Exeter, and many other places. Around 970 he presided at a conference of bishops, abbots, and abbesses, which drew up a national code of monastic observance, the Regularis Concordia. It followed Benedictine lines, but under it the monasteries were actively involved in the life of the surrounding community. For centuries thereafter the Archbishop of Canterbury was always a monk.

Dunstan took an active role in politics under Edgar and his successor Edward, but under the next king, Ethelred, he retired from politics and concentrated on running the Canterbury cathedral school for boys, where he was apparently successful in raising the academic standards while reducing the incidence of corporal punishment. On Ascension Day in 988, he told the congregation that he was near to death, and died two days later. *