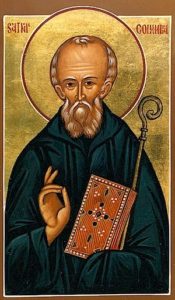 O God, who by the preaching of your servant Columba caused the light of the Gospel to shine in Scotland: Grant, we pray, that, remembering his life and labors, we may show our thankfulness to you by following the example of his zeal and patience; through Jesus Christ our Lord, who lives and reigns with you and the Holy Spirit, one God, for ever and ever. Amen.

In the troubled and violent Dark Ages in Northern Europe, monasteries served as inns, orphanages, centers of learning, and even as fortresses. The light of civilization flickered dimly and might have gone out altogether if it had not been for these convent-shelters. Columba, a stern and strong monk from Ireland, founded three such establishments. He founded the monasteries of Derry and Durrow in his native Ireland, and the island monastery of Iona on the coast of Scotland. Iona was the center of operations for the conversion of the Scots and Picts, and became the most famous religious house in Scotland. There Columba baptized Brude, King of the Picts, and later a King of the Scots came to this Abbot of the "Holy Isle" for baptism. The historian Bede tells us that Columba led many to Christianity by his "preaching and example."*