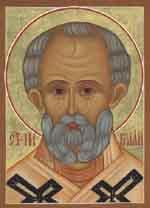 Grant, Almighty God, that your church may be so inspired by the example of your servant Nicholas of Myra, that it may never cease to work for the welfare of children, the safety of sailors, the relief of the poor, and the help of those tossed by tempests of doubt or grief; through Jesus Christ our Lord, who lives and reigns with you and the Holy Spirit, one God, now and for ever. Amen.

Very little is known about the life of Nicholas, except that he suffered torture and imprisonment during the persecution under the Emperor Diocletian. It is possible that he was one of the bishops attending the First Ecumenical Council of Nicaea in 325. He was honored as a saint in Constantinople in the sixth century by the Emperor Justinian. His veneration became immensely popular in the West after the supposed removal of his body to Bari, Italy, in the late eleventh century. In England, almost 400 churches were dedicated to him. Nicholas is famed as the traditional patron of seafarers and sailors, and, more especially, of children. As a bearer of gifts to children, his name was brought to America by the Dutch colonists in New York, from whom he is popularly known as Santa Claus.*

* A Great Cloud of Witnesses, Copyright © 2016 by The Domestic and Foreign Missionary Society of The Protestant Episcopal Church in the United States of America