Join us today, Wednesday, September 7, at St. Thomas' on the Bayou for Noonday Prayer at 12:10 p.m., or tonight for Evening Prayer to learn more about Kassiani, Poet and Hymnographer. 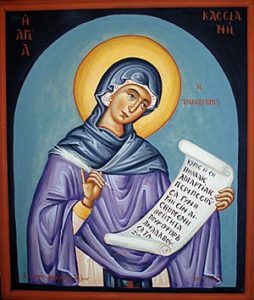 O God of boundless mercy, whose handmaiden Kassiani brought forth poetry and song: Inspire in your church a new song, that following her most excellent example, we may boldly proclaim the truth of your Word, even Jesus Christ, our Savior and Deliverer. Amen.

Kassia or Kassiani (Greek: Κασσιανή; 805/810 - before 865) was an Eastern Roman abbess, poet, composer, and hymnographer. She is one of the first medieval composers whose scores are both extant and able to be interpreted by modern scholars and musicians. Approximately fifty of her hymns are extant and twenty-three are included in Orthodox Church liturgical books. The exact number is difficult to assess, as many hymns are ascribed to different authors in different manuscripts and are often identified as anonymous.

Additionally, some 789 of her non-liturgical verses survive. Many are epigrams or aphorisms called "gnomic verse", for example, "I hate the rich man moaning as if he were poor."

Kassia is notable as one of only two Eastern Roman women known to have written in their own names during the Middle Ages, the other being Anna Comnena.

Kassia was born between 805 and 810 in Constantinople into a wealthy family and grew to be exceptionally beautiful and intelligent. Three Byzantine chroniclers claim that she was a participant in the "bride show" (the means by which Byzantine princes/emperors sometimes chose a bride, by giving a golden apple to his choice) organized for the young bachelor Theophilos by his stepmother, the Empress Dowager Euphrosyne.

When next we hear of Kassia in 843 she had founded a convent in the west of Constantinople, near the Constantinian Walls, and became its first abbess. It had a close relationship with the nearby monastery of Stoudios, which was to play a central role in re-editing the Byzantine liturgical books in the 9th and 10th centuries, thus ensuring the survival of her work.

The Emperor Theophilos was a fierce iconoclast, and any residual feelings he may have had for Kassia did not preserve her from the imperial policy of persecution for her defense of the veneration of icons. Among other things, she was subjected to scourging with a lash. In spite of this, she remained outspoken in defense of the Orthodox Faith, at one point saying, "I hate silence, when it is time to speak."

Kassia eventually settled on the Greek Island of Kasos where she died sometime between 867 and 890 CE. *

* The Lectionary, via Wikipedia