The Martyrs of Memphis 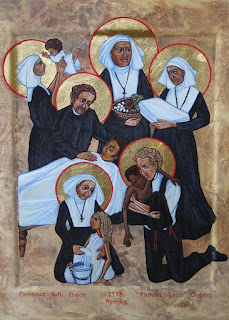 It is always amazing how the Church’s calendar of remembrances is ever relevant! We pray today also for all those caring for others in the pandemic.

We give you thanks and praise, O God of compassion, for the heroic witness of the Martyrs of Memphis, who, in a time of plague and pestilence, were steadfast in their care for the sick and dying, and loved not their own lives, even unto death; Inspire in us a like love and commitment to those in need, following the example of our Savior Jesus Christ; who with you and the Holy Spirit lives and reigns, one God, now and for ever. Amen.

In 1878 the American city of Memphis on the Mississippi River was struck by an epidemic of yellow fever, which so depopulated the area that the city lost its charter and was not reorganized for fourteen years. Almost everyone who could afford to do so left the city and fled to higher ground away from the river. (It was not yet known that the disease was mosquito-borne, but it was observed that high and dry areas were safe.) There were in the city several communities of nuns, Anglican or Roman Catholic, who had the opportunity of leaving, but chose to stay and nurse the sick. Most of them, thirty-eight in all, were themselves killed by the fever. One of the first to die (on 9 September 1878) was Constance, head of the (Anglican) Community of St Mary.*